The rock ‘n’ roll years are drawing to a close. The greats are dead, or long retired. But still a few hardy souls keep on touring, rolling back the years for audiences all around the world….but for how much longer?

Don’t it always seem to go?

You don’t know what you got till it’s gone.

Top British broadcaster, author and journalist Steve Jenner describes a selection of concert performances by some of the world’s greatest rock stars in their later years as performers, and the UK venues in which he saw them.

Get your ticket to the greatest show on earth. Because when it’s gone, it’s gone……

END_OF_DOCUMENT_TOKEN_TO_BE_REPLACED 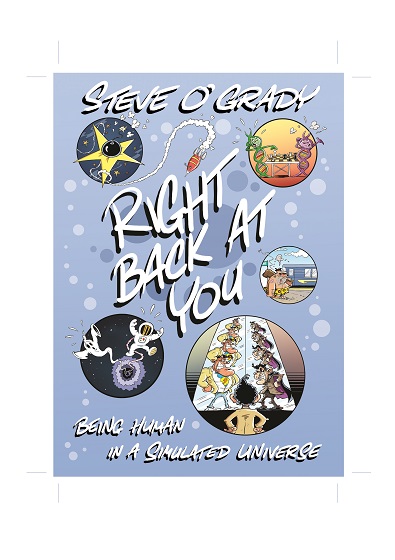 Right Back at You by Steve O'Grady

They are all fascinating phenomena which could only exist in a simulated universe.

Right Back at You examines human consciousness, showing how our human brains are immersed in simulation, because the universe is a simulation. Our contradictions as humans make us who and what we are, and the book explores how simulation is deeply connected with what we see, the way that we see it, and the consequences this has for us humans.

END_OF_DOCUMENT_TOKEN_TO_BE_REPLACED

True story of overcoming odds. This short story is an inspiring account of stepping into faith and discovering a dimension otherwise unknown without taking risks. It is meant as a kick start to encourage the reader to investigate possibilities that exist but are rarely accessed because of our hesitancy to risk the unknown. I was desperate enough to try it once and discovered that repeatedly throughout my life each time I had the courage to do the next right thing, astonishing outcomes resulted.

What Inspired You to Write Your Book?
Because I’ve realized that there really are solutions to my so called “insoluble” problems, I wanted to share with others these accounts. It’s become my credo. My hope is that if the reader is in a position where they feel there’s no way out to read the story and consider moving forward anyway. It has been my experience, without fail, that the universe is more supportive than one may believe and that we all have inherent abilities otherwise untapped.

END_OF_DOCUMENT_TOKEN_TO_BE_REPLACED

The Crushing Low Stakes Poker series is for anyone who:
• is interested in making a nice side income playing online poker;
• is new to poker or a beginning/intermediate player;
• is looking for solid strategy advice to consistently crush low stakes poker games.

Most poker books are written by professional poker players who play at the highest stakes. The same goes for most of the video content on poker training sites. Whereas you can learn a lot from studying that material, it won’t always be as useful to you when you’re mainly playing at the low stakes. Playing low stakes games against beginning and recreational players requires a whole different strategy and approach than playing high stakes games against the best of the best. The Crushing Low Stakes Poker series is focused specifically on low stakes play and teaches you the proper strategy to crush low stakes games.

Volume 2 of the series deals with heads-up play and covers heads-up fundamentals, theory and strategy. We will take a close look at important topics such as hand reading, manipulating ranges and post-flop play on different board textures. We will also cover common playing tendencies of low stakes opponents and how to take advantage of them. Becoming familiar with your opponents’ weaknesses and learning how to develop effective counter strategies, will give you the edge you need in low stakes games.

END_OF_DOCUMENT_TOKEN_TO_BE_REPLACED

The Crushing Low Stakes Poker series is for anyone who:
– is interested in making a nice side income playing online poker;
– is new to poker or a beginning/intermediate player;
– is looking for solid strategy advice to consistently crush low stakes Sit ’n Gos.

Most poker books and training videos on tournaments and Sit ’n Gos are by professional poker players who play at the highest stakes. Whereas you can learn a lot from studying them, they won’t always be as useful to you when you’re mainly playing at the low stakes. Playing low stakes games against beginning and recreational players requires a whole different strategy and approach than playing high stakes games against the best of the best. The Crushing Low Stakes Poker series is focused specifically on low stakes play and teaches you the proper strategy to consistently crush low stakes Sit ’n Gos.

END_OF_DOCUMENT_TOKEN_TO_BE_REPLACED

In this book, I introduce to you the complete concept of mindfulness, not just as a meditation technique but also as a life philosophy. This book will help you understand what mindfulness is all about and how to apply it in every aspect of your life.

What Inspired You to Write Your Book?
Because I am an avid learner, especially when it comes to health and self-help topics. So naturally it has been my lifelong passion to learn and grow in my experiences.

END_OF_DOCUMENT_TOKEN_TO_BE_REPLACED

Pittsburg Landing was a place at peace—one that never expected to be the site for one of the bloodiest battles of the Civil War. Peace is shattered as Confederate and Federal troops meet on the fields and farms surrounding a tiny Methodist church. In the midst of death and destruction, friendships form as four soldiers struggle to survive the battle.

Forced to leave his position as minister, Phillip Pearson knows his life is in danger, but not just from the Confederates. The Harper family, incensed at Pearson’s refusal to bury a philandering son, has a vendetta against him that is played out on the battlefield.

Demoted from his command by a West Point graduate, Capt.Michael Greirson is forced to choose between ambition and duty.

When a bumbling youth becomes his shadow, Private Robert Mitchell gains an unlikely friend—something that has been missing from his life. Afraid to trust, he is forced to confront those fears and depend on others in the heat of battle.

War is an adventure to Private Stephen Murdoch and his best friend, William Banks. For months they dream of the glory of war before volunteering together. On the eve of battle, they sense something momentous is about to happen. Their idealistic views fade in the blood of their fallen comrades.

As we celebrate the 150th anniversary in April 2012, Phillip Bryant provides a fresh look at the battle from the personal perspective of four men among the armies of panicked soldiers who marched and faced off against one another, ill-suited for infantry combat at close range but forced by fate and necessity at the Battle of Shiloh.

Phillip M. Bryant attended the University of New Mexico and earned his bachelor’s degree in history and with a minor in American studies. He has been active in local New Mexico reenacting and on the national level is a member of the 23rd SNY as part of the Army of the Pacific, 1st Federal Division. He has been researching the American Civil War for over 25 years. His sources have included diary accounts, autobiographies, historical monographs and first-hand reports on the actions taken 150 ago published in the War of the Rebellion battle reports and War Department communications.

The 45 year career story of one pro wedding photographer:
WHAT…
∙ humorous stories does he tell?
∙ sticky situations did he encounter?
∙ did he do to quickly double his annual income?
∙ info & advice does he have for photographers, especially new ones?

“This fast, funny and informative read really delivers all it promises!”

What Inspired You to Write Your Book?
Sleep robbing dreams and a wonderful career as a full time weddings-only photographer for 45 years in the MidWest.

END_OF_DOCUMENT_TOKEN_TO_BE_REPLACED

The tragic murder of Nancy Cooper gripped the Raleigh / Durham region of North Carolina. Nancy, a beautiful housewife and mother, was strangled to death in her upscale neighborhood in Cary, North Carolina in 2008. Her husband, Brad Cooper, was immediately suspected in what appeared to be a rush to judgment by local law enforcement in order to appease a nervous community. Brad was later arrested and then convicted of Nancy’s murder.

For many, the question remains, did they get the right person? Did the evidence convict Brad of murder or did he merely fit the narrative that the husband did it, which provided a quick solution to an unsolved murder? The murder conviction was overturned by the Court of Appeals, which called into question many of the assumptions regarding what happened to Nancy. Isolated Incident unravels many of the overlooked and ignored details of this very troubling case.

What Inspired You to Write Your Book?
I was doing research on local crimes in the Raleigh, North Carolina area, and I came across this tragic murder of Nancy Cooper. However, it was the investigation and subsequent trial of her husband, Brad Cooper, that resulted in me deciding to write about her murder and the circumstances after the fact.

Whether one thinks Brad is guilty or innocent in Nancy’s death, he was undoubtedly deprived of a fair trial. The police, District Attorney’s Office, and the judge seemed to have it out for Brad in a way that I thought only happened in the movies. The injustices against Brad have shaken my very beliefs in our judicial system, and I shutter at the thought of how many innocent people are currently sitting in prison. This case is just one example of how being close-minded and easily distracted by circumstances outside of the facts can result in horrific consequences. People are being convicted of violent felonies, not based on the evidence against them, but as a result of their personalities, faithfulness to their spouse, and other behaviors unrelated to the crime at hand.

END_OF_DOCUMENT_TOKEN_TO_BE_REPLACED

So many people don’t understand ADD, also known as Attention Deficit Disorder. In this easy to understand book, nurse and author, Beverleigh H. Piepers, explains the 6 different types of ADD and how their symptoms can present in vastly different ways. She also goes into great detail on treatment options and other important information about ADD. This book is a must have!

Beverleigh Piepers brings an unusually fresh level of passion to caring for people from several angles.

Beverleigh is a Registered Nurse, having received training both in the United States and Australia. She has more than 25 years of experience caring for patients and educating people about health issues all over the world.

Diabetes featured strongly in her career and as she was working with people on their health issues, what struck her was their intimate relationships were often a struggle also. They weren’t happy and neither were their partners. As well, she began working with people with ADD/ADHD, and drugs and alcohol problems.

Her interest in people and what drives them has been what drives her. How people think and how their lives play out led her to train and work as a Chemical Dependency Counselor. From there Life and Health Coaching and she is now undergoing further training as an Interventionist.

She found there was so much contradictory complicated information around for people to absorb … so she is motivated to help people discover exactly what they should know and what they could be doing to heal their body and their life.

Many times, lifestyle factors such as diet and exercise can completely reverse conditions such as Type 2 diabetes, so Beverleigh publishes books to help people take control of their own lives without the need for dangerous procedures and drugs.